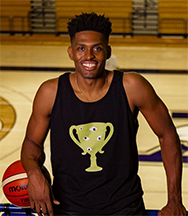 Brandon Sherrod grew up in Bridgeport, Connecticut  and graduated Yale in 2016 with a degree in political science after taking a year off to sing and travel the world with the Whiffenpoofs.  In 2016, he was part of a Yale basketball team that won the Ivy League and a game in the NCAA tournament; he earned all-league honors in setting the NCAA record with 30 consecutive field goals.  While at Yale, he and Javier Duren formed Team Sober, to discourage underage and excessive drinking.  Since then, Brandon played pro basketball in Italy for five years while becoming fluent in Italian. More recently, he joined pro teams in Finland and then Israel.

Recognized for having coached young athletes and encouraged students' academic and social development as a mentor and motivational speaker, Brandon is excited to be part of the CASA effort to help children in Connecticut.

He and fellow ambassador Miye Oni, along with CASA volunteer Dwayne Jackson, are featured on the Connecticut CASA YouTube channel--for example, in this video.  Brandon and Miye, and their CASA roles, were also highlighted in this article.